Clearly I don’t spend much time on this blog, much as I love it, so I’ve decided to archive it. Everything that’s already here will stay, but any future writing will appear on my regular blog with the tag “edmund spenser.” 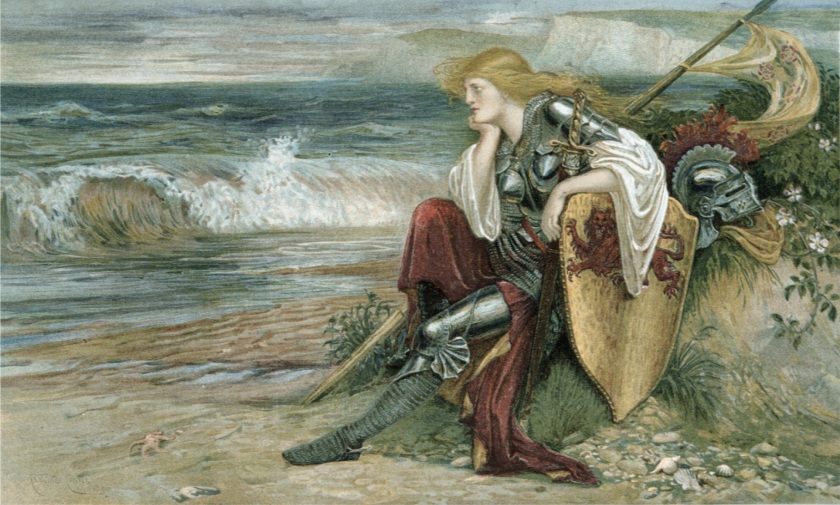 Over at MuggleNet, Dr. Beatrice Groves argues convincingly that the title of J. K. Rowling’s alias’s latest book, Troubled Blood, is a reference to the Faerie Queene. Dr. Groves was first put on the scent by Nick Jeffery, but gained an extra clue from Rowling’s new Twitter header image, half of which is a Walter Crane woodcut of Florimell.

The image that Rowling has chosen shows the fleeing figure of Florimell. Florimell is a figure I have written about previously in reference to Harry Potter, for she is an interesting example of the way in which Rowling draws on Spenser’s allegorization of morality through the visual appearances of his characters. Both writers use doppelgängers to explore the difficulties that beset moral interpretation – and the false and true Florimell are a tempting parallel for the false and true Mad-Eye Moody. Florimell is trapped for a whole book of the poem without anyone realizing she is missing because she has been replaced by the false Florimell. And (as with the real Mad-Eye trapped in his deep chest) she remains imprisoned in a deep cave, only to be released at the very end of Book IV.

I’ll add one more comment, unrelated to Spenser: Dr. Groves mentions Rowling’s apparent love of white horses (which may have given her Galbraith novel Lethal White its title). In 1946, English novelist Elizabeth Goudge published a novel called The Little White Horse, which Rowling has said she adored as a child. The roots of her obsession with white horses may go back all the way to childhood.

Jenny Walicek writes about Spenser’s poem “Visions of the worlds vanitie” in Studies in Philology (Summer, 2008), claiming that “within each of the nine allegories Spenser has hidden two separate biographies of a pre-Fall emperor and a pre-Reformation pope.”

To summarize one striking example, the seventh stanza is about a wealthy elephant that parades around wearing a “gilden towre” until he is pained by “a little Ant, a silly worme”.  The emperor referenced is Trajan, who looted 150 tons of gold from Dacia (as recorded on Trajan’s Column, or tower) and took Rome to its peak of wealth.   While in Antioch sentencing his outspoken critic Ignatius (Bishop of Antioch) to death by lion, Trajan suffered a stroke from which he never recovered.  The pope referenced in this allegory is Leo X, who actually owned a pet elephant that was paraded about wearing a tower, and who was the pope when Martin Luther nailed up his 95 theses and began the Reformation.  Furthermore, Luther was condemned at the Diet of Worms.

According to Donald Beecher, in the sixteenth century, people thought of the spiritual life as a war.

This sense of the spiritual life was part of a deeply implanted teleological fixation. The progress of the soul was attached to the menace of time, to the quest for spiritual geurdons and to a constant monitoring of the forces within which kept the life pure and on course.

In the same vein, from Frederic Ives Carpenter:

In both poets [Spenser and Tennyson] the moral conclusion is the same. Despair and pessimism are moods. They are not things to be blown away by argument. In this field even wisdom entangles herself in overwiseness. ‘Vain words’ do not help the matter. Action, sunlight, sympathy, the consideration of Divine mercy, the consideration of the solidarity of existence and our oneness with the whole,—these are the only remedies and the right remedies against despair and negation.

The progress of the soul through despair comes by action, not argument.

[Cross-posted from The Escapement] 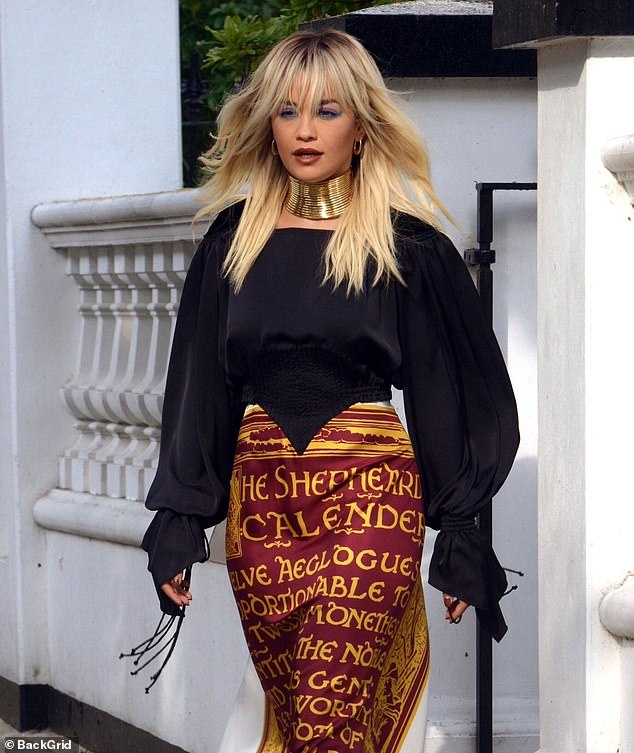 For reasons unknown, singer Rita Ora (I won’t blame you if you don’t know who that is) wore a skirt printed with what appears to be the title page of the Shepheardes Calendar. Spenser just sat up in his grave and blinked. 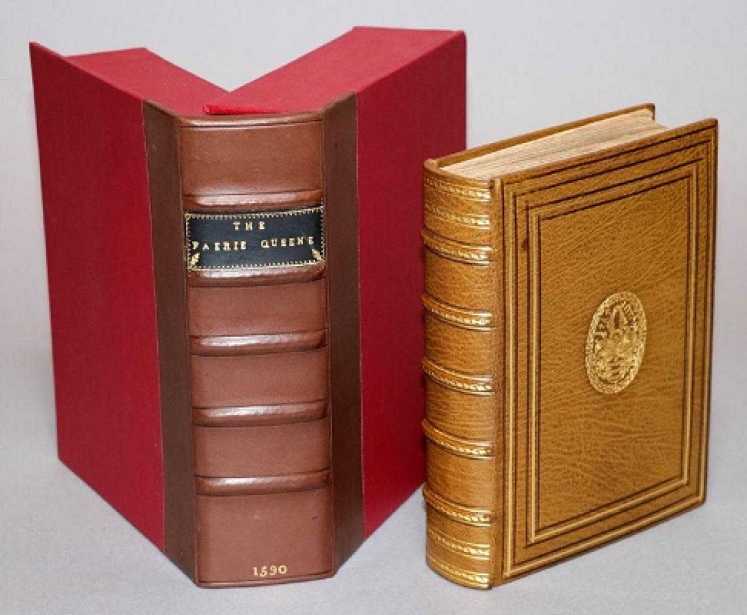 You can own it for between ten and fifteen thousand dollars.

Doctor I. A. Richards’s conception of a poem as a health-giving adjustment of impulses may not cover all poetry—I am not sure. But it certainly covers the Faerie Queene. Perhaps that is why, though it may fail to gain some readers, it seldom loses those it has once gained. I never meet a man who says that he used to like the Faerie Queene.

I can certainly say this is true of me.

The more nearly Spenser approaches to drama the less he succeeds. He does not know the rhetoric of the passions and substitutes that of the schools. This is because he is not the poet of passions but of moods. I use that word to mean those prolonged states of the “inner weather” which may colour our world for a week or even a month. That is what Spenser does best. In reading him we are reminded not of falling in love but of being in love; not of the moment which brought despair but of the despair which followed it; not of our sudden surrenders to temptation but of our habitual vices; not of religious conversion but of the religious life. Despite the apparent remoteness of his scenes, he is, far more than the dramatists, the poet of ordinary life, of the thing that goes on. Few of us have been in Lear’s situation or Hamlet’s: the houses and bowers and gardens of the Faerie Queene, both good and evil, are always at hand.

Anne Lake Prescott, co-editor of Spenser Studies, will appear on Canadian radio in a two-part interview on August 15th and August 22nd, both at 11 am EDT. Prescott is also an expert on John Donne, of whom she says:

Donne had a really good ear for the rhythms of English, so when he violates the rules, he knows what he’s doing. To capture more of the shifts and curls of the human imagination and love and fear. What made the later 17th century reject him is precisely what made people in the early 20th century accept him.

The show will accept call-ins, in case any of you have a burning question for Dr. Prescott.

The thought of Paradise Lost is not created in and through the poem: it is represented in the poem. But Spenser in The Faerie Queene does his thinking as he goes along, arriving often, as it seems, by accident, as a result of some particular instance he has seized on, at a deeper formulation than that with which he began, but also a stranger formulation. You cannot run Spenser’s thinking backwards. Milton can see farther than Spenser into any question set before him and defined for him. Spenser takes us into regions of thought the existence of which Milton would never have suspected—nor would we have suspected them, either. And to Spenser himself they come as a surprise.

For, all that moueth, doth in Change delight:
But thence-forth all shall rest eternally
With Him that is the God of Sabbaoth hight:
O thou great Sabbaoth God, graunt me that Sabaoths sight.